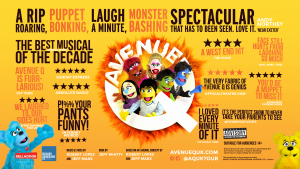 Avenue Q is the laugh out loud show that’s had sell out runs on Broadway, in the West End and all across the UK.

This cheekily charming musical tells the story of the loveable (and unforgettable) characters on a downtown New York street trying to make sense of life’s burning issues – like what do you do with a BA in English? How do you find your purpose? And is the internet really just for…nevermind.

Packed with mischief, bad behavior and a little political incorrectness, AVENUE Q is truly the musical like no other – so don’t let your life suck, book your tickets today!

Created by Jeff Marx and Robert Lopez (Co-creator of BOOK OF MORMON and writer of the songs for Disney’s FROZEN).

From the producers of Footloose, Flashdance and American Idiot.